In the summer of 2010, Al was traded from the Timberwolves to the Utah Jazz.

Al couldn’t have been happier. While he enjoyed his time in Minnesota, the chance to play with All-Star Deron Williams and the rest of the talented Utah team was a long-awaited gift.

The Jazz were thrilled, too.

“We are happy to acquire a young power player who has developed into one of the best low-post scorers in the league,” Utah GM Kevin O’Connor said in a statement provided by the team. “We gave up significant assets to obtain Al and we look forward to watching him progress with our team.”

Al’s first season as a Jazz-man brought a few ups and downs the way of No. 25 and his Utah brethren.

The in-season departures of coach Jerry Sloan and point guard Deron Williams were a shock to the system, but Al didn’t back away from the challenges. Instead, he saw the need for a new leader and stepped up to become part of the the foundation for a young team to build on.

It was an injury-riddled season for the Jazz, but No. 25 started in all 82 games during the regular season. Big Al also regained some of his explosiveness in 2011, showing he was fully recovered from the devastating knee injury he suffered in 2009.

“Last year, he never regained his pop,” said Al’s former coach Kurt Rambis. “[Now] you can clearly see it–just the way that he runs and moves and jumps and how quick he is and how explosive he is. He’s back to the old Al Jefferson.”

The return of Al’s “pop” contributed to his 37 double-doubles during the season and 794 total rebounds–the second highest total of his career.

With a new coach and young budding stars all over the court, there was a bright future ahead for the Jefferson-led Utah Jazz.

Back to the Playoffs

In the lockout shortened 2011-2012 season, Al furthered his improvement, transitioning into his role as team leader while continuing to put up the impressive numbers that have become common for him.

Al showed energy and tenacity all season as well as an improved defensive game, and heading into the All-Star break, many were calling for Al to be selected to his first All-Star team, including Brian T. Smith of The Salt Lake Tribune who noted:

Now, if the Jazz keep winning during January and Jefferson keeps producing, the eight-year veteran could finally be in the running for an All-Star spot.

He entered a game Tuesday against Cleveland ranked second among NBA centers in average scoring (18.1) and third in the combined statistic of points/rebounds/assists (27.9). Jefferson’s defense has also improved: he ranked seventh in steals (1.1) and 11th in rebounds (8.4) and blocks (1.5).

While Al didn’t get the elusive All-Star selection, he ended the season tied for seventh in the league with 31 double doubles and led his team back to the playoffs.

Behind Jefferson’s strong season, the young Jazz finished 36-30 and secured the eighth seed in the West. In the playoffs, they faced the daunting task of tangling with the San Antonio Spurs—the veteran-laden No. 1 seed.

Al was matched individually with one of the all-time greats at the center position, Tim Duncan. No. 25 fought valiantly with Duncan, holding him below his season average for points and rebounds. Meanwhile, Al paced Utah with 18.3 points and 8.5 rebounds per contest. 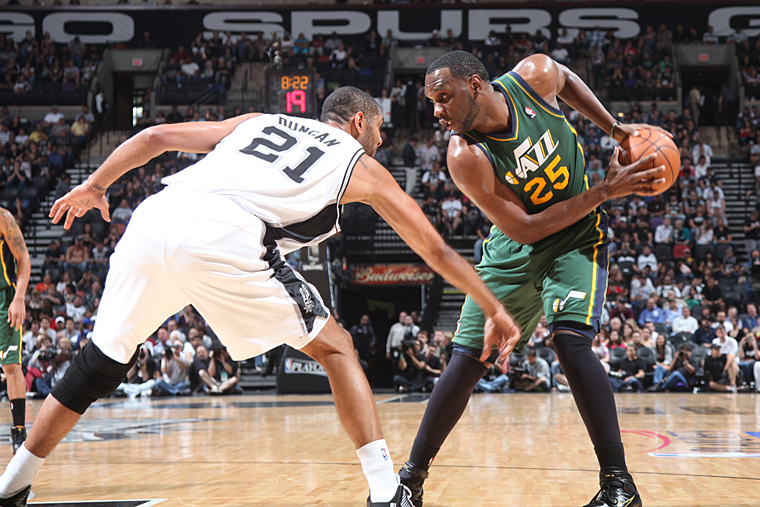 While Big Al matched up admirably with Duncan, Utah simply couldn’t measure up top to bottom against San Antonio. The Spurs swept the Jazz in four games and would eventually go on to reach the conference finals.

Heading into the 2012-2013 campaign, Al and the Jazz were facing what figured to be a tightly contested playoff race in the Western conference. Throughout the season, Al was the driving force for the Jazz, leading the team again in scoring and rebounding and finishing in the top ten in the league in double doubles yet again with 37 double doubles compiled throughout the course of the season.

Most notable was how Al’s presence seemed to grow as the playoff race grew tighter. He posted a career high 40 points late in the season against the Timberwolves and stated that he was hoping to be the catalyst for the Jazz to make a return trip to the playoffs as noted by Lynn DeBruin of the Associated Press:

”I remember being in that zone many times before, but tonight it was all about the playoffs to me,” Jefferson said after scoring 40 points in Utah’s 107-100 victory over the Minnesota Timberwolves on Friday night. ”I just kept telling myself, talking to myself: We got to do it, start now, start with me, not only on the offense but on the defense, too. That’s what I kept telling myself.”

Unfortunately for Al, the Jazz narrowly missed out on returning to the playoffs, falling just two games shy of the No. 8 seed with a 43-39 record. Despite the season ending early, Al had established himself as a veritable franchise player, and figured to be one of the most valued free agents heading into the offseason.

[Continue to the next section of Al’s career: Charlotte]